Out of our absolute commitment to boater comfort and safety, we at Fireboy-Xintex would like to remind you how important it is to have and maintain a Carbon Monoxide Detector on board in any marine environment. Wherever fossil-fueled equipment (engine, generator, gasoline engine, diesel, etc.) is in use, it will produce Carbon Monoxide as a natural byproduct.

Carbon Monoxide is odorless, colorless, and tasteless. The only way to know if you or your guests are at risk is with a Carbon Monoxide Detector. Our products are designed to operate in extreme and harsh marine environments such as salt spray, humidity, and severe temperatures. Your home detectors are not subject to the same standards as marine carbon monoxide detectors.

Underwriter’s Laboratories (UL for short), instituted a mandate approximately five years ago, outlining the End of Life Standard. The first CMD-4M Detectors were shipped from Fireboy-Xintex in March of 2010, meaning some are in end of life.

Approximately five years after activation, your Fireboy-Xintex Carbon Monoxide Detector will enter the EOL (End of Life) phase of its existence, beginning at 4 years and 11 months.

There will be both an audible (intermittent beep once every 30 seconds) and visual (green LED will switch to “off,” red LED “on”) component to this alarm. During this initial flagging period, depressing the Test/Silence button on the right side of the detector will silence the alarms for three (3) days at a time. Once the detector has reached its five-year threshold, the detector will shift to an alarm that cannot be manually silenced. At this point, a new Fireboy-Xintex CMD5 Carbon Monoxide Alarm will need to be installed.   According to the American Boat and Yacht Council (ABYC A-24) Standards and Technical Information for Small Craft, a carbon monoxide detector must be installed on all boats with an enclosed accommodation compartment and a gasoline generator set or inboard gasoline propulsion engine. Detectors shall be located in the main cabin area and each separate sleeping area to constantly monitor the atmosphere. The National Marine Manufacturers Association (NMMA) has also mandated that this be part of their certification process.

Model CMD-4MR-RLY has six wires coming out of the back panel and model CMD-4MR has two wires coming out of the back panel. A CMD4 detector is shown above.  If you would like to locate the age of your Carbon Monoxide Detector, there are manufacture dates and End of Life dates printed on a label attached to the underside of the front cover. An additional label may be located on the blue horn on the circuit board. See photos below. 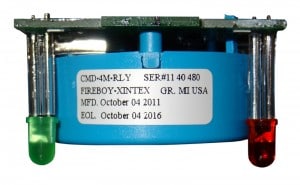 To open the front cover (see enclosed diagrams), push in from bottom and the cover should release. Full installation instructions will be supplied with the new CMD5-M alarm.

For over 45 years, Fireboy-Xintex has been innovating and providing marine quality safety products. As the leading Marine Safety Products supplier, we are committed to providing the ultimate in safety, and understand and comply fully with the necessary testing and verification processes required to meet government and regulatory agency’s approval. We maintain these high standards and will continue to do so to insure our customers have received the best possible product for its intended purpose.

Thank you so much for your time and attention to this matter, and enjoy the season!

This website uses cookies to improve your experience while you navigate through the website. Out of these, the cookies that are categorized as necessary are stored on your browser as they are essential for the working of basic functionalities of the website. We also use third-party cookies that help us analyze and understand how you use this website. These cookies will be stored in your browser only with your consent. You also have the option to opt-out of these cookies. But opting out of some of these cookies may affect your browsing experience.
Necessary Always Enabled
Necessary cookies are absolutely essential for the website to function properly. This category only includes cookies that ensures basic functionalities and security features of the website. These cookies do not store any personal information.
Non-necessary
Any cookies that may not be particularly necessary for the website to function and is used specifically to collect user personal data via analytics, ads, other embedded contents are termed as non-necessary cookies. It is mandatory to procure user consent prior to running these cookies on your website.
SAVE & ACCEPT